Today I would like to talk with you about limiting beliefs. Where do they come from? How do they influence our life? And most importantly: how you can change them to something positive and empowering. Remember that changing your mindset is always possible. Transformational coaching is one of the best ways to do it. 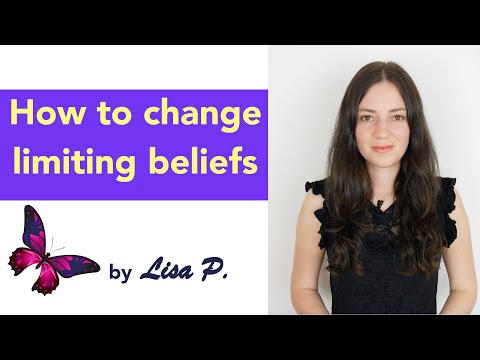 What are limiting beliefs?

We create our life by making decisions, important choices, and taking action. Which depend a lot on the way we are thinking and on our beliefs.

People will interpret the same events and facts in a very different way. It will depend on what they believe in. And these interpretations will influence their decisions and actions. If you are not happy with the results that you are getting, maybe you are not making the best decisions. The reason could be in your limiting beliefs and their influence on your interpretations of reality.

The interesting thing is that almost no one has chosen their beliefs consciously and deliberately. They mostly come from our childhood, parents, school, and society. What did you hear about yourself in the past? What did you learn about this word and other people? Did you hear that you are lazy, not smart enough, or maybe that you need some specific degree to become successful? Your beliefs could be about your identity, value, or capability, and those are individual beliefs. Another type of belief is more universal. Something that you apply not only to yourself. For example, one can believe that it’s impossible to start a career-change after a certain age. And that will be a universal belief.

We all have many different beliefs, and there is nothing wrong with it. The problems start when those beliefs have a negative influence on our life. For example, by stopping us from doing something that we want to do.

How to change limiting beliefs?

Fortunately, there is a way to change your beliefs to something more positive and empowering. I will guide you through 5 steps and share an example from my life. Finally, if you would like to go deeper and transform your life, you can find a transformational coach that is right for you.

To change your limiting belief, you need to identify it. This is the first step. Make your belief specific and clear. Check what kind of situations or circumstances can trigger it. When and where does it become more active? Is it an individual belief or a universal one? For example, if you found a belief like “I am not good enough”. To make it more specific, check when and where you think in that way. During a date, job interview or maybe when you think about learning a new skill, like a language or some sport? I’ll give you one of my examples from the past. For example: one of my beliefs was: “I can’t do a coaching course in London because my English is not good enough”. This is how it sounded after I’ve identified it. Before I was telling myself: “My English is not good enough”. The problem was that in this way, I couldn’t change it because it was not specific.

2. Find the influence of your limiting belief

After identifying a belief, you need to check how exactly is limiting you. This is the second step. Ask yourself those questions: How is this limiting belief influencing your life? What did you do or not do while believing in it? What decisions are you making? How does it make you feel? I’ll continue with my example. After finding my limiting belief about my English, I also saw its limiting influence. While I believed in it, I couldn’t do what I really wanted. I would’ve just given up on my dream if I hadn’t changed it. So, during this step, you need to create enough motivation for changing your limiting belief. Also, try to find you are gaining from having this belief. Your mind probably “needs” this for something. What is your payoff? Are you avoiding some difficulties or stress? Or maybe some risks? It’s different in different situations, but no one knows it better than you. What are you getting by keeping this limiting belief?

Once you’ve found the reasons, you can go to the third step: challenging your limiting belief. You need to make your belief weaker by finding how it can be wrong. Maybe some of your past experiences show that this affirmation was not always true. Maybe you are missing some important details in the present. Look also for other people’s examples. How did they achieve what you think you can’t? Especially if your belief is universal. In my case, I was asking myself more questions to find the truth. Did my level of English really influence my capability to follow that coaching course? The only truth was that my English was not as good as I wanted it to be. So, I needed more facts, and I went to the introductory day. I’ve listened to the presentation, talked to some people and had a more realistic picture: yes, my English was not perfect, and it could be a bit challenging for me to do the course, but it was definitely possible for me to follow it if I really wanted.

Then I moved to the fourth step, which is finding a new realistic and positive belief. However, you can’t just rewrite your limiting belief in the opposite way because it has to be believable. For example, I couldn’t change mine to something like my English is so good that I can easily follow the course. Because it was not true. But everyone can find something believable and helpful at the same time. In my case, it was something like: even if it’s challenging, I can still do the course, and I can also improve my English to get the results that I want.

After choosing a new empowering belief, you can move to the fifth step. Now you should start to cultivate this belief and making it stronger by taking some action. In my case, I did it by using English as much as possible: by watching, reading, listening, and speaking. And as you’ve already understood, I’ve enrolled in the course and later successfully finished it. If I didn’t challenge my belief, I could’ve been waiting for another year or two, but my motivation was very strong, so I did everything I could to change this limiting belief, and I achieved my goal.

As you can see, motivation is very important in this process, so in addition to these five steps, I recommend you to watch my video: How to stop procrastinating and start taking action. If you do the exercise that I explain there, you will get enough motivation to change your limiting belief.

Practicing gratitude is a simple but a very powerful way to change your state and your life as well. If you want to know why gratitude is so important, how it can help you, and get some tips and examples on simple but powerful ways to practice gratitude then continue reading. Probably you have already…

Do you often have trouble when you encounter a problem? Every day we face challenges and problems in life, both big and small, and so it’s very important to be good at tackling them. However, that can be easier said than done, and if we make one of these mistakes when trying to solve a…

Is there something in your life that you want to do, or you know that you should do it, but you don’t? Maybe you can’t find the time or just procrastinating. Maybe, you have some fears or doubts. You can have some real reasons that stop you, or maybe, you just looking for some excuses….

I did the Tony Robbins 30-day program Personal power 2 three times in the last one and a half year. If you want to know more about the program, my experience, why I did it several times, what is so special about it, and more about other inspiring ideas and insights that I’ve got, then…